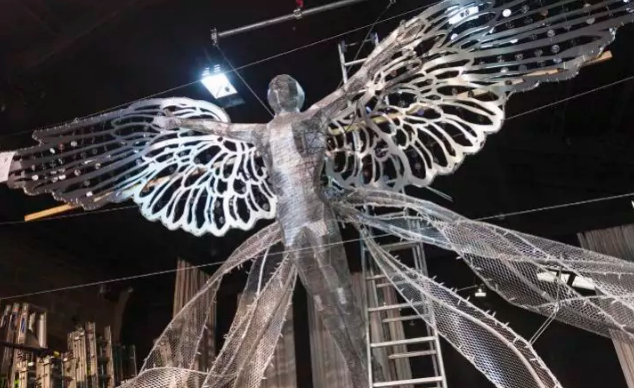 Paul Dart is sitting under a canopy of shiny silver baubles in front of a wall of fairy lights in his studio in Bermondsey, south London.

It could be mistaken for Father Christmas’s grotto, as it is crammed with life-size reindeer and giant candy canes.

As creative director of James Glancy Design, Dart, 62, creates Christmas-light installations in some of the most famous streets in the country, including those on Regent Street and in the St James’s region of London – a project commissioned by The Crown Estate.

Yet Dart says he ended up in the world of Christmas lights ‘by accident’. He trained as a theatre-set designer at the Central School of Art and Design in London, then opened a gift shop in South Kensington, applying the same extravagant creativity that he’d brought to his set designs. “We created a complete turf floor, a real fountain with fish and a beach,” he says. “People loved it.”

Later he teamed up with one of his customers, James Glancy, who ran a marketing company, and began making Christmas- light installations as a sideline. “At first I didn’t take it seriously,” says Dart. But the business took off, and in 1990 he started working there full time. He says, “I’m used to creating theatrical moments and I still do that, except it’s in a street rather than an auditorium.”

This year he was recruited by The Crown Estate to design the lights for St James’s and Regent Street. First he dreamt up the lights, settling on an angel shape. “I wanted the right balance of modern and traditional,” he says.

Next he built full-size prototypes. The angel shapes were cut from aluminium, with the wings and skirts welded on. “People always think that my job is just to pop a fairy on top of a tree, but it’s actually really technical,” he adds. Finally, the angels were sprayed with paint, and the bulbs were added by hand.

Dart and a group of engineers and technicians drove the lights to Regent Street and St James’s on a lorry and spent two weeks putting them up, working through the night when the street was quietest. They were tested at 3am, allowing revellers a sneak preview. “They were mainly people staggering home from clubs,” says Dart. “But even at 3am in the rain it looked just as festive and Christmassy as I imagined.”